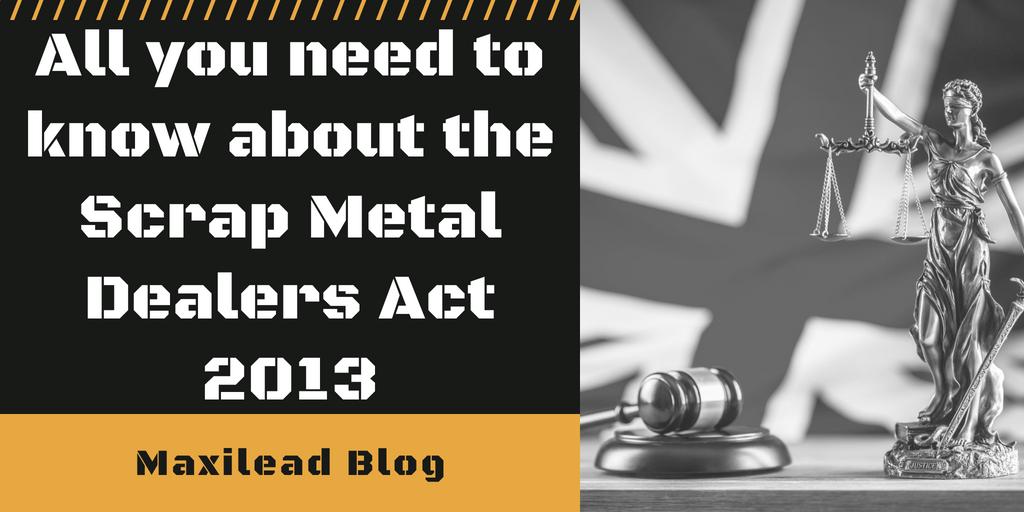 When did the scrap metal dealers act come in to force?

The current act that stands in place today was passed on 1st October 2013, when new licence applications to work as a scrap metal dealer were first accepted by local councils.

Although only passed on the 1st of the month, it required all existing scrap metal dealers to apply under transitional agreements by no later than the 15th October.

The newer act repealed the previous scrap metal dealers act of 1964. Giving it a more modernistic approach and bringing legislation up to date with current affairs.

Why was the scrap metal dealers act created?

According to gov.uk, the 2013 act was brought in to tackle ‘rising levels of metal theft’. Since the introduction of the act, it was reported in the ‘National Strategic Assessment of Serious and Organised Crime’ in 2017 that “available data indicates that metal theft continues to decline.”

In the actual act, the purpose of its creation is stated. The scrap metal dealers act presents that: “prior to it [the act], metal theft offences were increasing, driven by the rising cost of metals on the world commodity market. The cost of these offences to the UK was estimated to be at least £220 million per annum. The crimes posed a threat to the security of the national infrastructure and affected a range of sectors including power, transport and telecommunications.”

By ensuring there is legislation in place to regulate the scrap metal trade, the Government are reducing crimes that were costing the country millions of pounds year on year by actively tackling those with dishonest intentions.

What does the scrap metal dealers act entail?

The physical ‘scrap metal dealers act 2013’ is a 12 paged document in which rules and regulations are laid out in plain text.

The actual act itself:

The creation of this act means a fairer trade for both the general public, and honest companies such as Maxilead Metals who have always prided themselves in doing everything by the book.

Who does the scrap metal dealers act involve?

The act applies to anybody who is definitive of a scrap metal dealer. That can be from verified street vendors to established companies such as ours.

Is the scrap metal act going to be revised?

Opportunities for revisal have been discussed within Parliament. Interested parties have made suggestions as to what the act should cover to further tackle metal theft. Some of these noted points include:

At present, there is no active discussion in parliament concerning the act. However, with the recent increases in lead prices and potential further increases in copper, metal theft figures could potentially see another rise. The government, therefore, could soon be faced with more pressures to update this 5 year old legislation. Perhaps to action the above points made, or perhaps to introduce even more rules that will really regulate the scrap metal trade.

Are Maxilead compliant with the scrap metal dealers act 2013?

Yes! We have a number of accreditations and licenses. Here at Maxilead, as mentioned above, we do absolutely everything by the book. This means that we can bring you the best value for your scrap metal, by honest and legal means. To find out more, get in touch with us.